After millennials seemed poised to createa ‘roaring 20s’ of home buying in May and a boom of purchasingstarted to crest in June, July followed the trend further, according to Ellie Mae.

The split of origination purpose for loans closed to millennials widened from the month prior. Purchases accounted for 61% of activity in July, up from June’s 56%, but down from 76% year-over-year. Refinancing made up about 38% of July’s millennial loans, decreasing from 43% the month prior, but up significantly from 23% the year before. 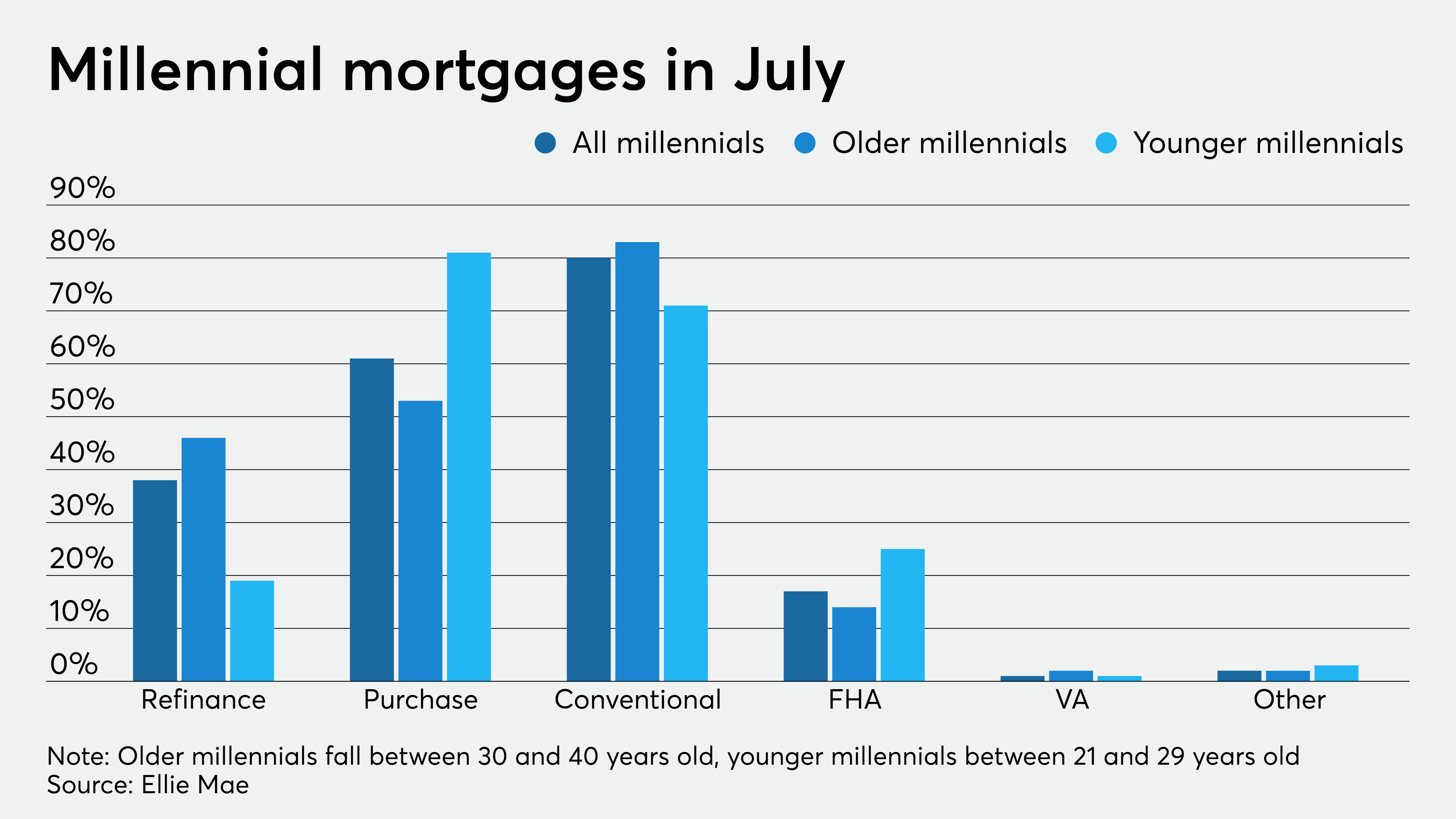 More of the same is expected going forward as larger numbers of potential shoppers come of age andbetter acquaint themselves with home buying.

“We’re seeing a new wave of younger millennial homebuyers flood the market as we enter peak home-buying season,” Joe Tyrrell, chief operating officer at Ellie Mae, said in a press release. “With interest rates at historic lows, now is the perfect time for younger millennials to purchase a home andstart building equity. To encourage homeownership among the millennial generation, especially younger millennials, it is imperative lenders educate these borrowers on all loan types, including affordable options with less stringent credit requirements such as FHA loans.”

Age plays a major role among first-time purchasers as the average years for millennial borrowers inched down to 31.7 years from 31.8 years in June while increasing from 30.5 years annually.

The average millennial FICO score held at 739 month-over-month, but jumped from 728 year-over-year as lenders became more risk averse with coronavirus uncertainty continuing to swirl around the economy.

Conventional mortgages took up an 80% share of completed loans to millennials in July, while Federal Housing Administration loans accounted for 17%. Mortgages guaranteed by the U.S. Department of Veterans Affairs amounted 1%, while other unspecified types of financing represented the remaining 2%.

Married individuals accounted for approximately 59% of loans closed compared to 60% in June and 55% the year before. Overall, about 57% of primary borrowers were male, 30% female with 13% unspecified. The average loan amount climbed to $211,264 from $208,759 in June and $202,695 year-over-year. The time to close stayed flat at 45 days month-to-month but thesurge in volume brought by the low rates increased closing times by four days annually.

Purchase share for the elder group only rose to 53% in July compared to 81% for the younger group. By loan type, conventional mortgages made up an 83% share for older millennials versus 71% for younger while FHA loans accounted for 14% and 25%, respectively. Average FICO scores for the older faction touched 747 while the younger set — who have had less time to accumulate credit — reached 728.